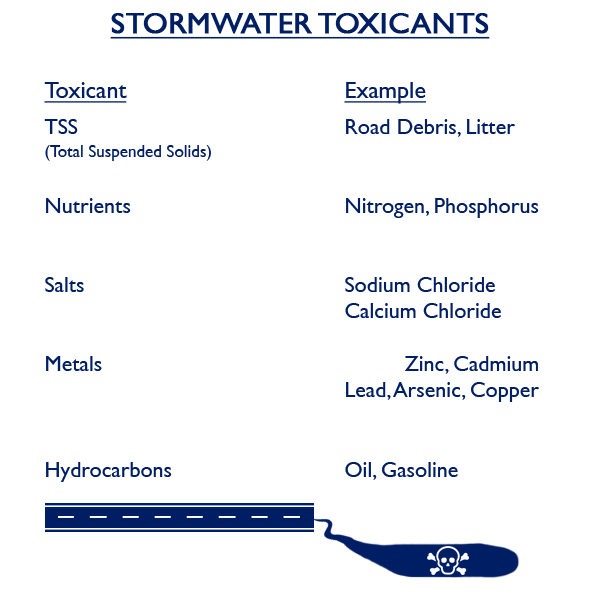 Stormwater contamination has become a major problem. According to the National Resource Defense Council:

“The United States Environmental Protection Agency (EPA) now considers pollution from all diffuse sources, including urban stormwater pollution, to be the most important source of contamination in our nation’s waters.”

Although the science behind this problem has been well established, there are still many barriers to resolving this issue. One major barrier to managing water resources is the cost of updating the current infrastructure. According to ASCE’s 2017 Report Card, wastewater in the US was graded as a “D+”, meaning it is barely above failing. They go on to say:

“It’s expected that more than 56 million new users will be connected to centralized treatment systems over the next two decades, requiring at least $271 billion to meet current and future demands.”

The U.S. Global Change Research Program discusses the wide array of effects of flooding: human safety, human health, property, economy, ecology, and infrastructure. When stormwater is not appropriately mitigated it can develop into conditions that are no longer safe. In the worst of cases the Environmental Protection Agency (EPA) has to declare the site a “Superfund” site, and they must intervene. The EPA explains the Superfund program as the following:

“EPA’s Superfund program is responsible for cleaning up some of the nation’s most contaminated land and responding to environmental emergencies, oil spills and natural disasters. To protect public health and the environment, the Superfund program focuses on making a visible and lasting difference in communities, ensuring that people can live and work in healthy, vibrant places.”

One of the tasks given to Solar Roadways as part of their first USDOT contract was to work on the problem of stormwater.

The Solar Roadways® team got a chance to visit an old Superfund site in Tacoma, Washington. This site was first identified as such in 1983. Since then, great efforts have been made by the EPA and the City of Tacoma to clean up this site. The EPA describes this Superfund site:

“The Commencement Bay Nearshore-Tideflats (CB/NT) Superfund site is located in the City of Tacoma and the Town of Ruston at the southern end of Puget Sound in Washington. The site encompasses an active commercial seaport and includes 12 square miles of shallow water, shoreline, and adjacent land – most of which is highly developed and industrialized.”

During this visit the SR team met with some of the people working on this site including the City of Tacoma’s own Center for Urban Waters. They explained what a huge issue stormwater is, especially in urban areas. They demonstrated their new methods for mitigating and treating stormwater and wastewater.

To meet the USDOT requirement, Solar Roadways created a model Cable Corridor at the site of our prototype parking lot. All contaminants that cover the roadways can be washed away by storm events and collected in a tank below the frost line within the Cable Corridor. From the collection tank, the water can be pumped any direction, to a water treatment facility, or treated on site and released back into the aquifer. Another option for stormwater is recycling. Even though the resulting water would be non-potable it could still be used for a variety of household or business purposes or for irrigation. Each customer would have to investigate their city’s policies for recycled water and decide what program best suits their needs. 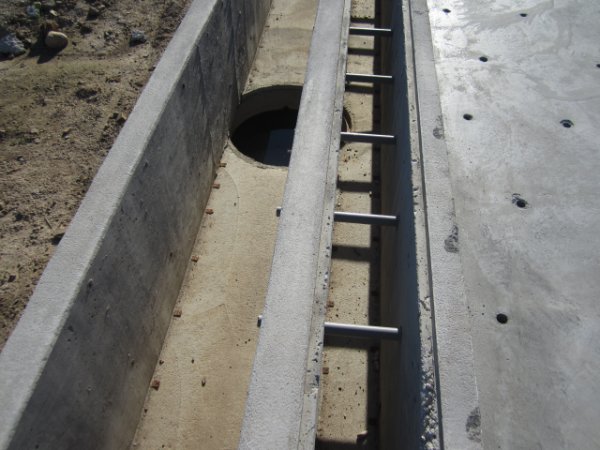 This water collection system also helps prevent hydroplaning and flash flooding by giving the water a channel off of the roadway. The underground tanks can also help retain water. In the event of flooding, the panels remain functional, as they are hermetically sealed. SR panels are more likely to handle the abuse of a storm event than traditional solar panels since they can’t be damaged by wind or hail, and their secure position at ground level should help them to survive hurricanes and tornadoes much better than solar panels up high on places such as roofs.

Stormwater is a pervasive environmental problem that is not currently being mediated effectively. Implementing the appropriate infrastructure will be a costly but worthy endeavor. SR offers the infrastructure to mitigate stormwater while offering a return on investment. SR is a durable, long lasting solution to help keep waterways cleaner and help to recycle water responsibly.