July, 2011 – Solar Roadways Incorporated was awarded a Phase II SBIR (Small Business Innovative Research) contract by the U.S. Department of Transportation. The 2-year $750,000 Phase II contract was to build a proof-of-concept parking lot made of Solar Road Panels and to conduct civil engineering tests including:

One lesson learned during Phase I was that a 12-foot by 12-foot road panel wasn’t very practical: It would be extremely heavy and difficult to transport. Another is that large squares make poor building blocks around curves and over hills.

The Phase II prototype was reduced to a hexagon shape measuring approximately four square feet. The assembly weighed 110-pounds, so an individual would be able to place them in a vehicle to transport them to a site. The small hexagon shape reduced the weight for practicality and allowed SR2 to accommodate curves and hills. 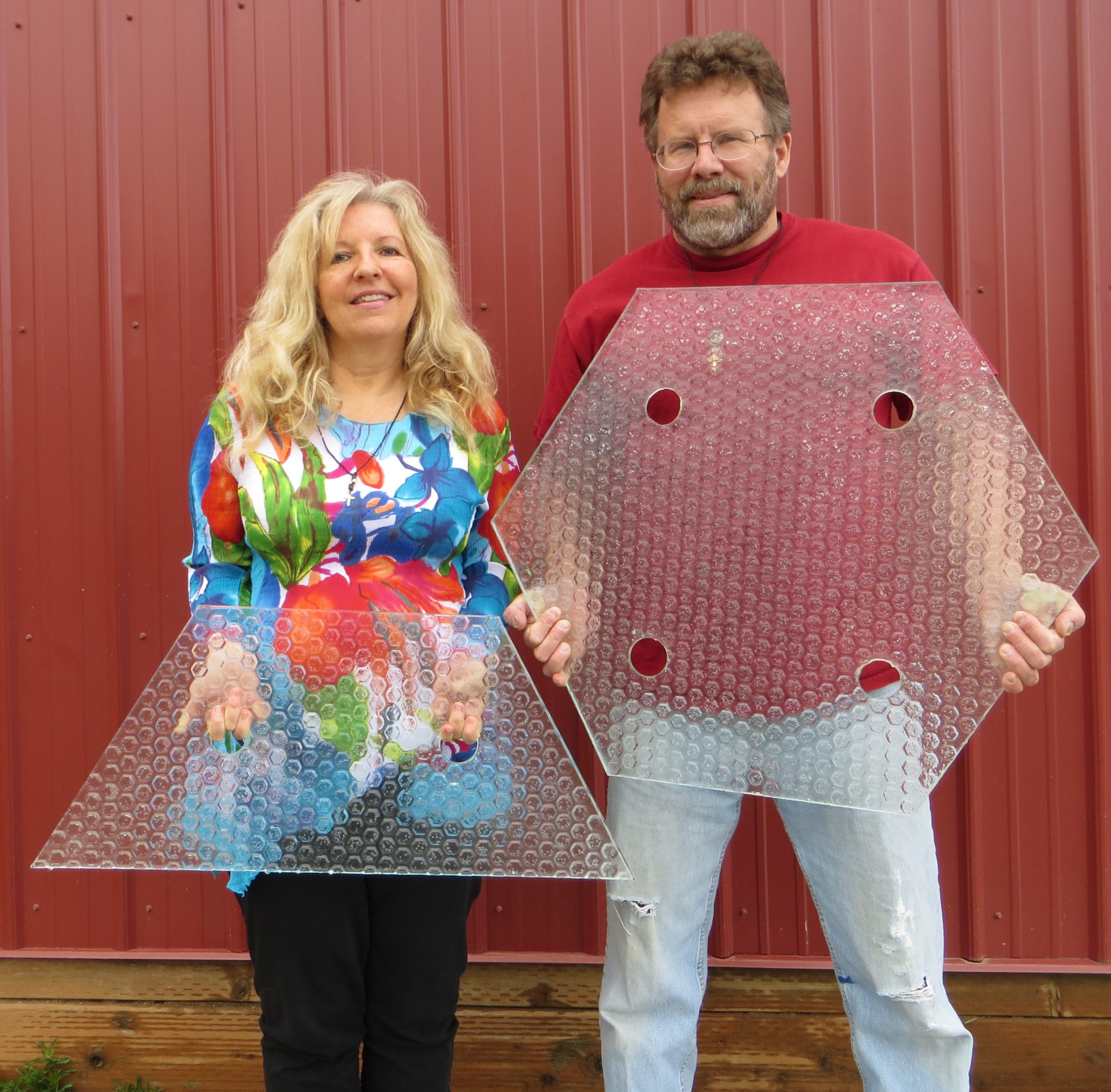 We knew that we needed to incorporate LED as painting on glass was out of the question. LEDs would allow road lines and signage to become dynamic for the first time. We added  a microprocessor for intelligence. With much experience driving the snowy/icy roads of north Idaho, we knew that a heating element was a must to help keep the panels clear and improve safety.

LED technology has been around for decades, as have microprocessors. Heated glass has been in the rear windows of cars since at least the 70’s. President Carter had solar panels installed on the roof of the White House in 1977. These proven, time-tested technologies make up the bulk of a Solar Road Panel.

The big hurdle was the glass surface: no one had ever attempted to make a driving surface out of glass. Could it handle the abuse of a fully-loaded semi-truck? Could the surface be textured in a way to prevent vehicles from sliding on a wet surface, while still allowing sunlight through to the solar cells beneath? This is where the bulk of the R&D would be focused during our Phase II research.

Glass samples were sent to a civil engineering university for traction testing. We started the testing with a glass sample of an ADA (Americans with Disabilities Act) approved pedestrian surface. A British Pendulum device was used to test the traction of the glass. 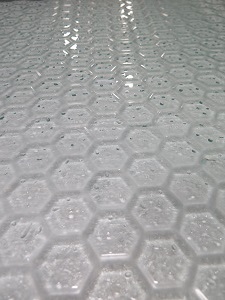 Finding a glass manufacturer proved to be a challenge. By glass industry standards, our order would be considered small, it was a very specialized custom order, we needed it fast, and we had a limited budget. Jockimo Glass came to the rescue and produced the glass for us. We later used their shop in Aliso Viejo, California for the final assembly of the 108 SR2s that went into the prototype parking lot.

Glass samples were also sent off too another civil engineering university for load testing and impact resistance testing. The load testing showed that a pavement made of our SR Panels could withstand a static load of 250,000 pounds. To put that in perspective, the national weight limit for semi-trucks is 80,000 pounds. So the test results indicated that SR Panels can withstand more than three times the legal load of fully-loaded semi-trucks. These results were incredible but needed to be reconfirmed, so the USDOT asked us to perform a 3D Finite Element Method analysis (computer simulation) at a different civil engineering university. The results came back the same: 250,000 pounds.

The site for the prototype parking lot was chosen. It would be installed on the south side of the Solar Roadways electronics shop in Sagle, Idaho. Ten percent of the aggregate used in the base was recycled glass. 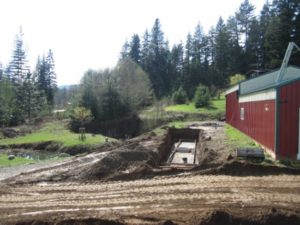 Beginning construction alongside the electronics lab 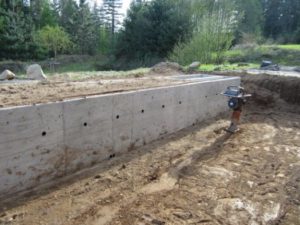 Side of the Cable Corridor 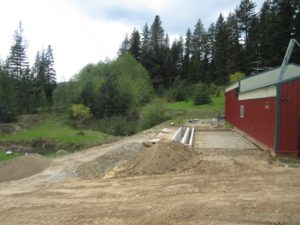 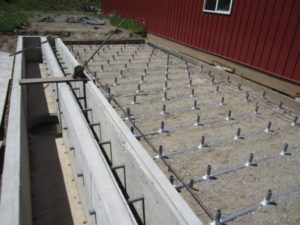 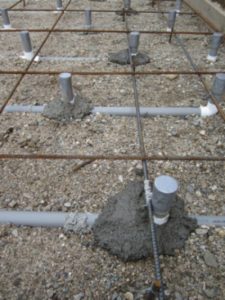 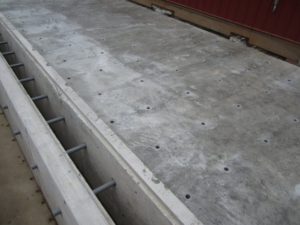 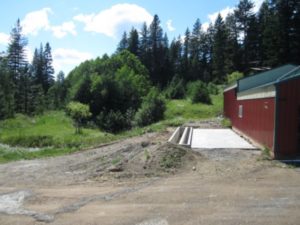 Cable Corridor and base completed

Scott Brusaw designed the circuit boards and wrote the firmware and software for the new SR2 system. Jockimo began manufacturing the glass and SR began testing the new circuit boards. As a precaution to spare the fragile solar cells, final assembly took place at Jockimo Glass in southern California. The SR team (Scott and Julie and two volunteers) worked around the clock at a hotel to solder and assemble the panels. 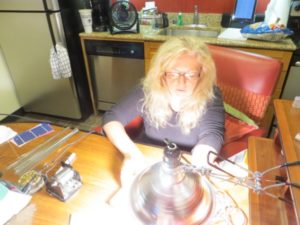 Once back in Idaho, shipments of completed panels began to arrive from Jockimo. Scott tested them one last time by lining up six panels in the shop and allowing them to run for 24-hours before installation.

After 24 hours of initial testing, the 6-panel row was installed and placed online. Unfortunately, due to several delays by subcontractors and suppliers, the installation of the prototype parking lot in began in December – in north Idaho.

As each row was installed, cabling was fed through the conduit and into the Cable Corridor, where it would be connected to another circuit board in a weatherproof utility box. 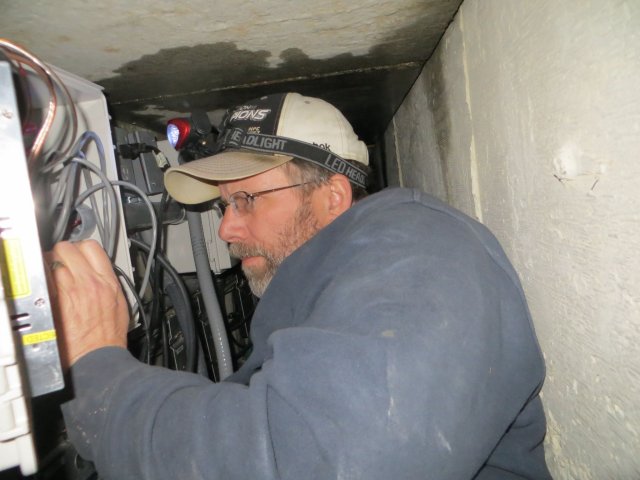 Inside the Cable Corridor 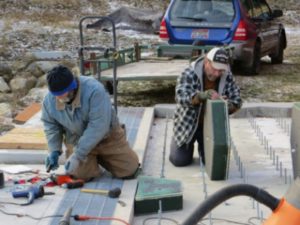 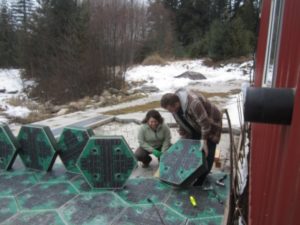 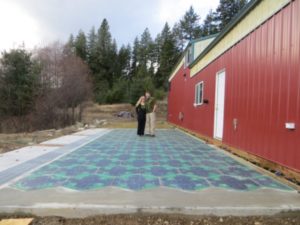 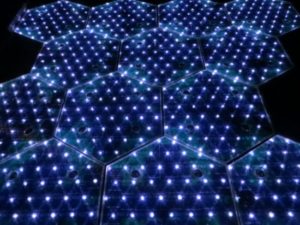 Phase II Final Report: Much of the final report contains proprietary information, so only the summary (Conclusions) section is presented here.

As stated earlier in the report, all of the measured results were done in Sagle, Idaho near the Canadian border at a longitude of 48.2024 degrees north. To put this in perspective, the northernmost point of Maine is at longitude 47.46 degrees north, which is several miles south of the Sagle, Idaho testing area. The farther south one travels, the better solar harvesting one can expect. Therefore, the rest of the U.S. could expect to generate more power than the test results show in northern Idaho.

In the original solicitation, eight attributes for a new type of pavement were defined:

In the Solar Cells section, it was learned that a micro-inverter recorded 52397Wh from the output of four hexagon Solar Road Panels over a six-month period.

In the LEDs section, it was learned that it will take 704-watts per lane mile to illuminate a standard road line configuration. Multiplying this by 24 and by 365, it is seen that the road will require 6.167MWh per year per lane mile for the LEDs. This assumes leaving the LEDs on 100-percent of the time, which is unnecessary.

Power generated (414.984MWh) minus power needed by the microprocessor and supporting circuitry (worse case – 106.311MWh) minus power required by the LEDs in a typical road line configuration (left on 100-percent of the time – 6.167MWh) leaves 302.506MWh per year per lane mile to be distributed to surrounding homes and businesses or to be used to charge electric vehicles. According to the U.S. Energy Information Administration: In 2012, the average annual electricity consumption for a U.S. residential utility customer was 10,837 kWh. Using this number, approximately 30 homes per lane mile could be taken off grid with a Solar Roadway and an efficient energy storage system. It would be 43 homes per lane mile with 100-percent coverage. So a simple 2-lane rural road could take 86 homes completely off-grid along the Canadian border. The farther south the system is used, the more homes can be taken off-grid.

In northern climates, the heating elements can use up to 2.281MW per lane mile with the heating elements constantly on. Since they only need to be on during the winter months and sporadically even then, it is difficult to calculate the total power required to get through a winter. It would vary greatly from one location to the next and from one winter to the next. The costs of running snow plows and the chemicals used by the plows would offset the cost of the electricity needed to run the heating elements in the Solar Roadway system.

2. It is intelligent enough to transfer the power generated to where it is most needed or to a temporary storage apparatus.

The DC energy from the solar cells can be arranged in any series/parallel combination to produce whatever voltage/current requirements are needed. This allows that the system can be connected to any type of storage device available.

In the prototype system, a virtual storage system was used: the micro-inverters converted the DC energy from the solar cells into 240VAC, which was then fed into the load center at the Solar Roadways facility. The power was used by the building during the day. Any excess power was placed on the grid for future use (net metering). When needed (such as nighttime), power was drawn off the grid to power the system.

In this way, the pavement can power surrounding homes and businesses. As advances are made in the field of energy storage, the Solar Roadways system can implement the new technologies where desired.

3. It is made of recycled or other sustainable materials.

Recycled glass was used for ten percent of the aggregate in the base. The internal support structure can be made of recycled plastic. Virtually everything in the system can be reused or recycled with in keeping with the “Cradle to Cradle” design philosophy being used.

4. It can be modular for ease of replacing worn or damaged sections.

Each Solar Road Panel works independently and no two panels are physically connected to one another. They are mounted to the base in a backplane style with one 6-conductor plug and four retaining bolts. The panels communicate with one another and can report in when a panel stops communicating. Each panel assembly weighs 110-pounds, so replacing a panel is quick – no more than five minutes. The modularity of the system means that once a Solar Road Panel is replaced, the road will be like new again.

5. It is durable enough to withstand repeated loading from heavy traffic at or above the level of current pavement systems.

The testing showed that the Solar Roadways system could withstand the loading of a 250,000-pound truck.

6. It meets or exceeds safety characteristics of existing pavement systems.

A British Pendulum device was used, and the samples exceeded the desired Skid Numbers, which qualifies for vehicles traveling at a mean speed of 80mph on a wet surface.

Solar road studs – LED devices that are installed on road lines to alert drivers where the lines are at night – have been shown to reduce nighttime accidents in the UK by 72-percent (http://www.clearviewtraffic.com/images/file/White%20Papers/Five%20ways%20to%20make%20night-time%20driving%20safer.pdf).

Likewise, road lines illuminated in the Solar Roadways system will provide even more nighttime visibility and safety by illuminating the entire lines and adding verbiage and warning systems.

With an intelligent road (microprocessors positioned roughly every two feet), the traffic management capabilities are endless. Scott Brusaw was the keynote speaker at an annual Intelligent Transportation Systems conference. Many of the vendors approached afterward with the same concerns: their traffic management systems needed both power and communications in remote locations. The Solar Roadway system offers both.

In addition, the heated surfaces will help prevent snow/ice accumulation and prevent countless accidents across northern climates, including pedestrian and animal collisions.

7. It mitigates water runoff through either permeability or designed retention and filtration.

Stormwater can be filtered and retained in the Cable Corridor. It can then be moved either direction along the road to wherever it is desired, such as an aquifer or an agricultural area.

The flexibility of this system allows owners (parking lots, driveways, city streets, etc.) the option of treating stormwater on site and then using it for irrigation, gray water, landscaping, etc.

8. It is at a cost that allows it to be financially self-sustaining; meaning that the benefits of power generation and water runoff mitigation over the design life outweigh its initial cost.

The combination of the power generation, leasing of the accompanying Cable Corridor to power and data companies, water runoff mitigation, removing the need for line painting and snow plowing, and potential advertising (parking lots) should cover the costs of the system. None of this even takes into account the amount of subsidies available for renewable energy projects.

The original solicitation further states that, “Phase 2 efforts include manufacturing and demonstrating a working prototype pavement system that demonstrates potential for achieving at least 1/2 of the identified attributes.”

Potential for all eight of the identified attributes have been demonstrated. The technology works and, if the results of the record-breaking Solar Roadways Indiegogo campaign and the multiple letters of interest are any indication, the world is ready for this technology.

Artist’s conception of an SR2 panel