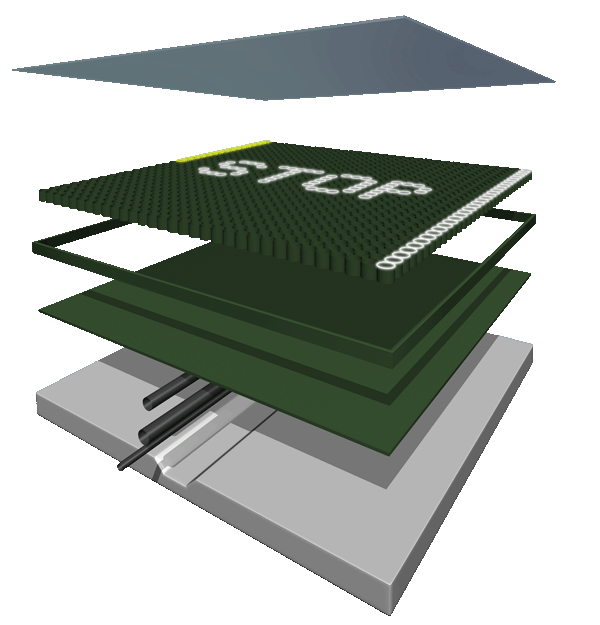 Artist’s conception of an SR1 panel 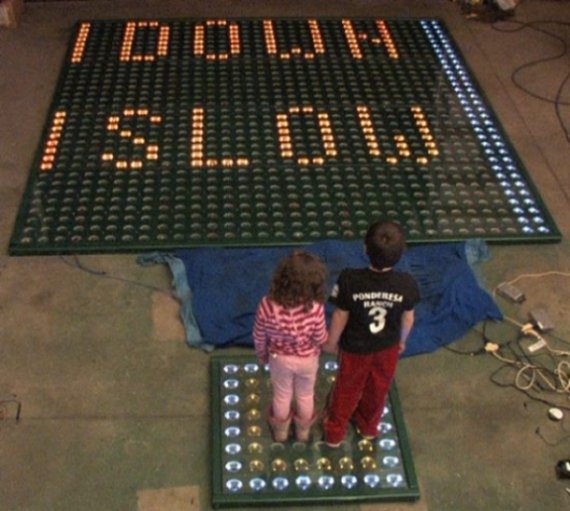 August, 2009 Solar Roadways Incorporated is awarded a Phase I SBIR (Small Business Innovative Research) contract by the U.S. Department of Transportation. The 6-month $100,000 Phase I contract is for “a detailed concept that demonstrates the viability of creating a prototype that satisfies the attributes described below:

Phase 2 efforts include manufacturing and demonstrating a working prototype pavement system that demonstrates potential for achieving at least ½ of the identified attributes.” (listed above – see Phase II Final Report Conclusions in the Phase II Research section)

To make a solar panel that could withstand the abuse of fully-loaded semi-trucks, a protective case had to be created to protect the sensitive solar cells and electronics inside. In addition, the surface of this case had to be transparent to allow the sunlight to reach the solar cells inside.

Deciding what to make this protective case out of was a materials engineering problem. Scott Brusaw is an electrical engineer (BEE, MSEE), so he looked up the top materials research labs in the nation. Penn State’s Materials Research Institute and the University of Dayton’s Research Institute were at the top of the list. Scott traveled to both universities and met with their materials research professors. Both research labs, without hesitation, suggested the use of glass for the surface. Unlike plastic, the optical properties of glass are stable against solarization (long-term darkening) and other UV induced mechanisms of material degradation. Float glass was recommended due to its widespread commercial availability and relatively low cost. 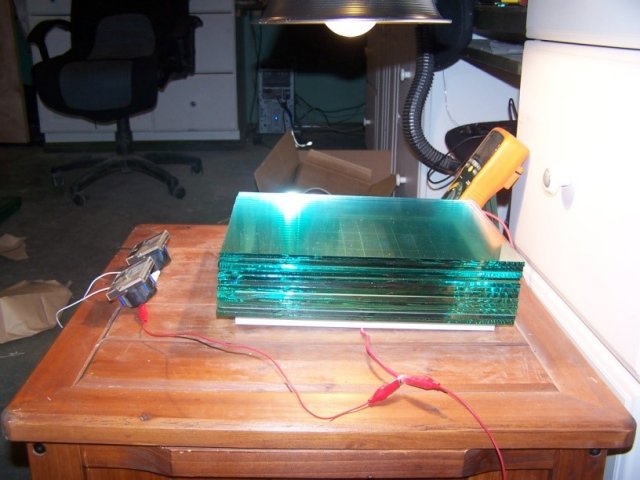 Testing the transmittance of float glass

Float glass comes in different forms. The greenish glass shown above is called soda lime glass and is the most common type. Windows and bottles are typically made of soda lime glass. The green tint is caused by the iron content of the glass. This same iron content negatively affects the transmittance (ability to pass sunlight) of the glass, so a low-iron glass was selected.

Due to the very limited budget of the Phase I prototype, glass was only studied, but not yet used during this round of funding. The findings were applied in Phase II.

Stormwater is just rain or melting snow that makes its way from our roads to our waterways. Imagine a heavy downpour: the stormwater flows across lawns/fields and picks up fertilizer, pesticides, etc. It then flows into the street, where it picks up vehicle droppings such as oil, antifreeze, etc. Currently, this toxic cocktail finds its way into our streams, rivers, lakes, and oceans. Some studies show that over 50-percent of some water pollution is caused by stormwater.

Capturing and filtering the stormwater before it reaches the waterways could solve the problem. A physicist/hydrologist once shared that, if we could move water just 200 miles in this country, we could eliminate drought conditions. 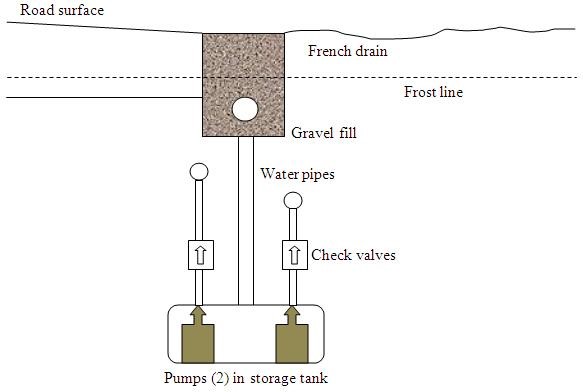 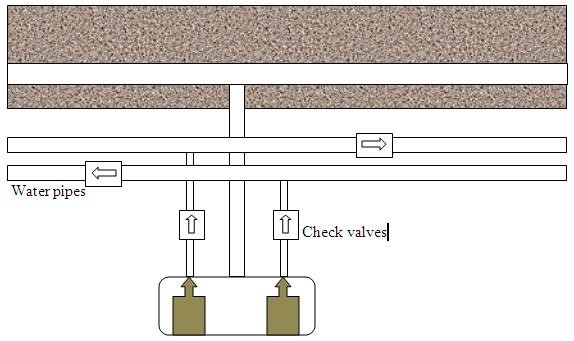 Side view of stormwater retention system

The SR1 was designed around a 32×32 array of LED cells. Each cell contains 3 white and 3 yellow LEDs to simulate any road line paint configuration. This required 64 circuit boards to create the 12-foot by 12-foot SR1. Another circuit board was needed for the microprocessor control unit. 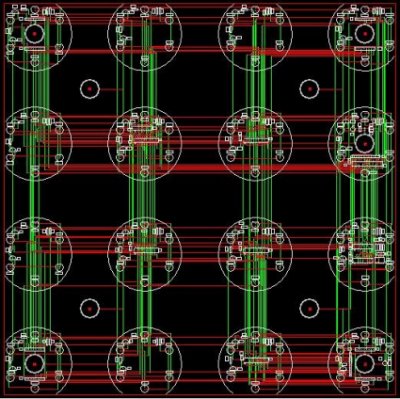 LED circuit board – 64 boards per panel 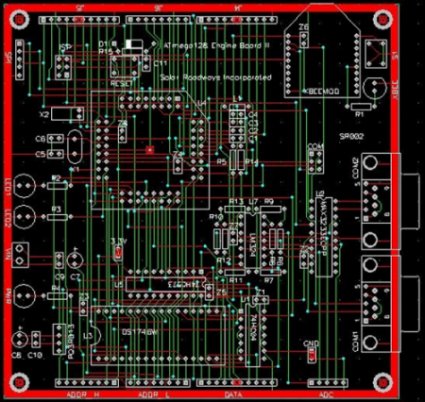 Scott Brusaw designed the two circuit boards required. 68 of the LED circuit boards were assembled and tested: 64 for the SR1 and another four for a prototype crosswalk panel. Three microprocessor boards were assembled and tested. These were the control/communications boards for the stormwater control system, the Solar Road Panel, and the Sidewalk Panel. An XBee RF module was added to the microprocessor board to incorporate wireless communication.

Scott then wrote the firmware for the microprocessor boards. A software program was needed for testing and control, including:

Configure which LEDs would turn on/off

Scott concurrently wrote the firmware and software programs for the desired interactions. 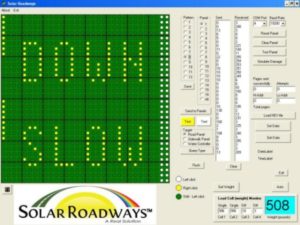 Screenshot of the testing software

Once all of the testing was done, it was time to assemble the panels. Scott and Julie had built an electronics lab on their property in Sagle, Idaho, but the shop floors were still dirt at the time and therefore unsuitable for the panel assembly. A good friend offered his shop space for the task. 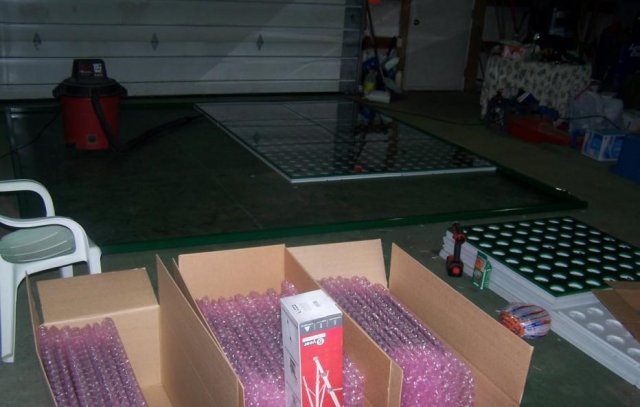 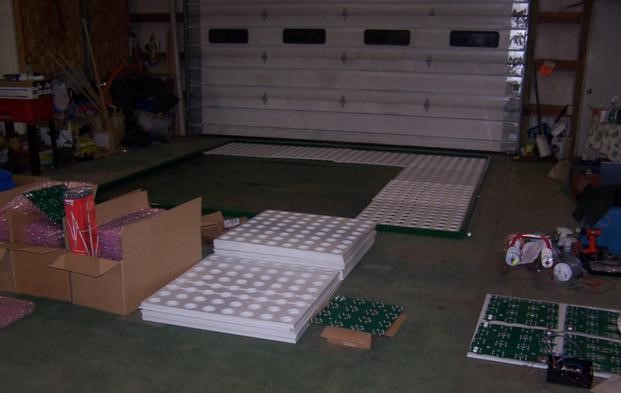 The idea was to assemble and test the panels, film a demonstration of the system, and then break everything down again. Helpers were on hand and Mark Dixon of YERT was visiting from Pennsylvania to do the filming.

Here’s where Scott made the worst mistake of his career: the SR1 used two power supplies – a 12-volt supply for the LEDs and a 3.3-volt supply for the control circuitry. In the hurry to get the panels assembled, Scott connected the power supplies incorrectly. 12-volts was applied to the 3.3V control circuitry, destroying all of the IC chips (640 of them) in the system. Replacement parts were ordered and delivered overnight. Scott, Mark, and other helpers spent the next two days desoldering and replacing the damaged ICs.

Once everything was repaired and running properly, filming began and pictures were taken.

You can see YERTs film, The Prototype here:

Scott drove Mark Dixon back to the Spokane Airport once the filming was done. Mark, reflecting on what had taken place, said, “You know what I found amazing? As miserable as it was having to repair all of those circuit boards, no one got upset. Everyone remained cheerful and just did what it took to repair the system and move on. What a great team.”