Since Solar Road Panels must be laid flat, unlike rooftop solar, we are collecting data at different latitudes to compare the difference in energy harvesting. We take regular store-bought solar panels and angle one to the south at the optimal angle for that latitude and place the other flat.

In April of 2015, a collection site was installed in southern Arizona at the Biosphere 2 in Oracle, Arizona. A second site was set up at Solar Roadways in Sagle, Idaho in August 2015. A third site was set up at the Missouri DOT Transportation Research Center in Chesterfield, Missouri in March 2016.

As can be seen from the data collected so far, the flat panels generate more energy than the tilted panels during overcast days. We believe this is because the photons are scattered on overcast days, and during such times, it is easier for them to land on a flat surface than one which is angled.

Each of these Data Collection Sites will soon receive a complimentary SR3 panel to diplay to thank them for their participation in this program. We are currently considering two more data collection sites: one below the 32 degrees N latitude and the other above the 49 degrees N latitude. They should be high visibility areas with an open southern exposure. 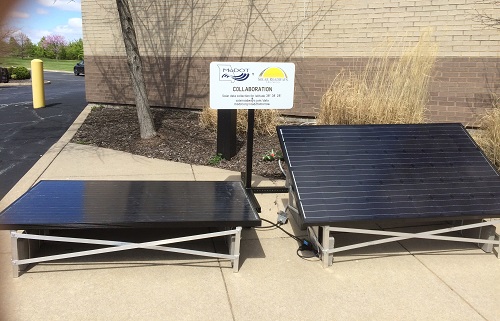