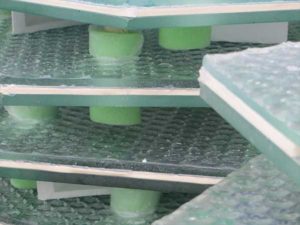 We were awarded a 2-year $750,000 Phase II SBIR contract by the USDOT in July of 2011. This funding allowed us to conduct more research and build the world’s first prototype solar parking lot. This was a complex task and extremely difficult to manage within the allowed budget. First, we had to create a brand new prototype: the SR2. We made many changes: the panels became smaller (about 4 square feet), changed shape to become hexagons, glass was used for the top and bottom of each panel and this time solar cells were included.


Creating the textured glass surface was one of the challenges. Various textures and panel shapes were developed and tested. In the end, a hexagonal shape and optimal texture were selected. We were pleased and surprised at the beauty of the glass in addition to its functionality. 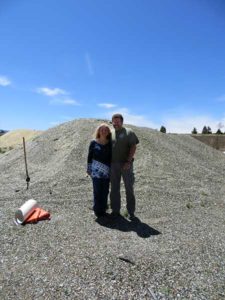 We wanted to use recycled glass in the concrete base that we had to pour for the parking lot (because it was new construction). That turned out to be a challenge. We learned that most glass just ends up in landfills, even when people are trying to recycle it. In the end, we had to travel to Montana to pick up recycled glass. Unfortunately, pulling 1,500 pounds of glass destroyed the transmission on our truck, but we did manage to get the glass home. We were able to successfully use it as 10-percent of the aggregate in our base. 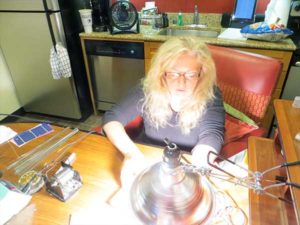 We managed to stretch the Phase II funding to create 108 panels, which we soldered by hand, along with two volunteers! We installed them ourselves too with handful of helpers. The chosen site was on our own property, adjacent to our electronics lab for easy monitoring and testing.
Due to multiple delays from our suppliers, we asked for and received an extension. Finally, in March of 2014, the installation of the world’s first solar parking lot was completed. 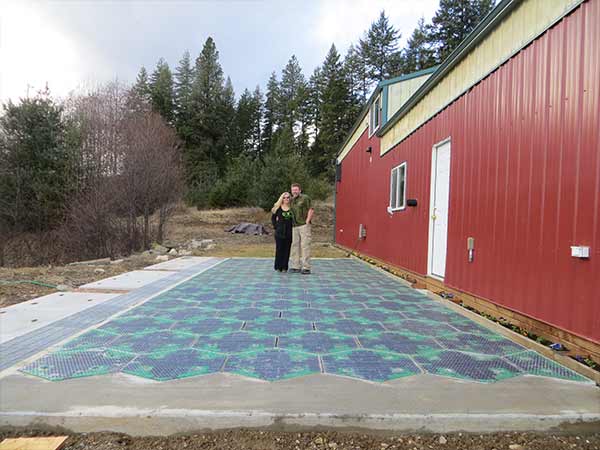 In 2011 the YERT team – who had visited us so early in our development – included Solar Roadways® in their documentary, Your Environmental Road Trip, which premiered in 2011. CNN began to create special segments about SR in 2011 too. That year also brought welcome attention from such media sources as: The Wall Street Journal, Smithsonian, CNET, and Scientific American. 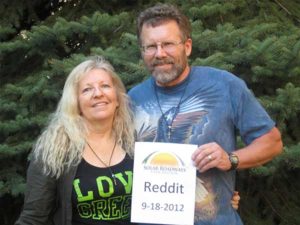 Although requests for interviews were regretfully declined a great deal of the time in deference to engineering, 2012 brought more diverse journalists who featured Solar Roadways®: The Los Angeles Times, Upworthy, Government Technology Magazine, and Pilot Challenge Magazine. Julie worked long hours to grow our social media presence and we even agreed to an AMA on Reddit.

In 2013, there were articles in USA Today, The Parking Professional, and Spiegel (Germany) and SR was honored to be chosen by Google as one of their Moonshots. Shortly thereafter Scott presented a Solve for X talk about Google Headquarters in NYC. We were also invited to visit the Google campus in California and enjoyed a ride in the Google Car. 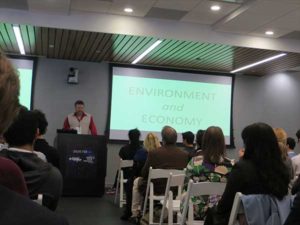 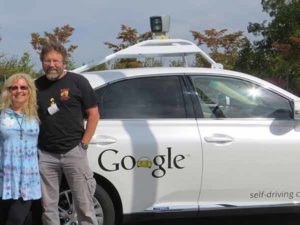 Also in 2013 Solar Roadways was chosen as a finalist in the World Technology Network awards in the category of Energy.
We had another connection with GE, when we were filmed for a short documentary by GE/Focus Forward. It was directed by Michele Ohayon and filmed by the wonderful cinematographer Theo Van de Sande, who filmed movies such as: Crossing Delancey, Blade, and Just Go With It. Watch it on our video page.

During this time, hundreds and then thousands of people began to reach out and inquire about purchasing SR panels, working for SR, and investing in SR. Many invitations for speaking engagements arrived. A handful were accepted, and many more regretfully declined as we attempted to stay focused on engineering. We began to be more and more aware of the need for help – actually a team, but had no funds for hiring. People began to suggest that we consider a crowdfunding campaign. While wrapping up the Phase II contract, we began to research this option. We decided another leap of faith was called for and we launched an Indiegogo campaign with the goal of raising one million dollars. Thanks to supporters from all over the world, we more than doubled our goal, raising over 2.2 million dollars.

A crowdfunding campaign is not for the faint of heart! We worked literally every waking moment, sometimes 18 hours a day. We were busy replying to comments on social media, doing interviews, and filming “thank you videos” (one of our Indiegogo perks) on our parking lot until dawn.

Several things worked together to help: A wonderful volunteer named Michael Naphan made us a little video called Solar Freakin’ Roadways! We are so grateful that Michael saw the vision for this video and worked tirelessly to put it together (while sick!) during our campaign. We had never even met him – the kindness of strangers can be amazing! Later he came to visit us in Idaho and see the parking lot. 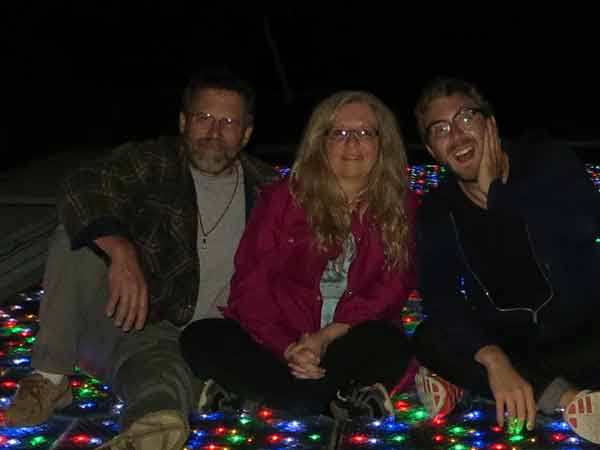 A team of supporters formed a Facebook Solar Roadways Support Team. They worked tirelessly to help spread the word about SR on social media, and have been a tremendous source of help and encouragement. It’s been amazing to have so many people feel compelled to join us on this journey and help make it happen. Even celebrities have supported SR. Their posts, tweets, blogs, and even videos made a big difference during the Indiegogo Campaign. We can’t begin to express our gratitude to people like: Julian Lennon, George Takei, Nathan Fillion, Mark Ruffalo, Stan Lee, and so many others. 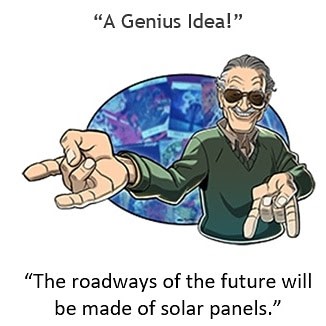 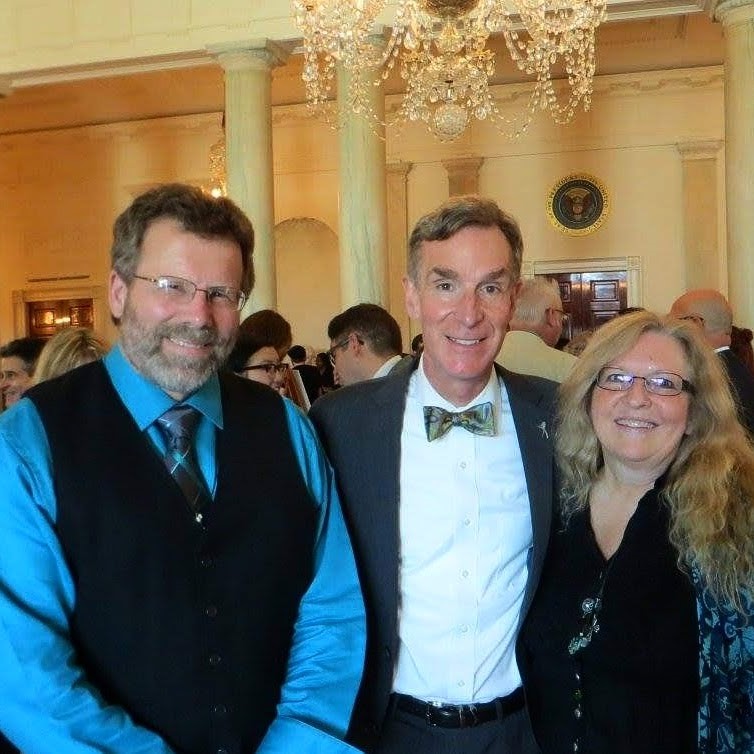 In June, Scott and Julie were invited to the White House for the (first ever) Maker’s Faire. President Obama spoke, and we were happy to meet Bill Nye there. 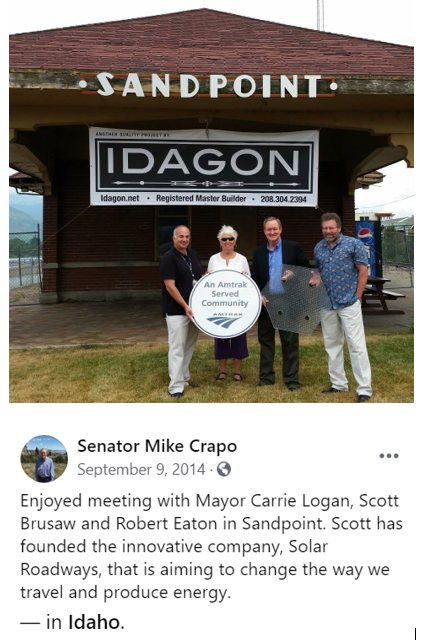 We hired 3 team members and began to purchase needed equipment. It’s been a solemn responsibility for us to take care to use the funding wisely. We’ve honored our campaign promises, knowing that manufacturing space and equipment were key to taking on more of the process internally in order to bring costs down.

In October, Indiegogo chose us as their speaker for their yearly staff meeting for employees from various locations. They only feature one campaign per year, so this was a big honor. They showed us the bell they ring whenever a campaign reaches 1M in funding. They said, “We got to ring that bell twice for Solar Roadways®!” Indiegogo also featured Solar Roadways® in a short documentary filmed in December. 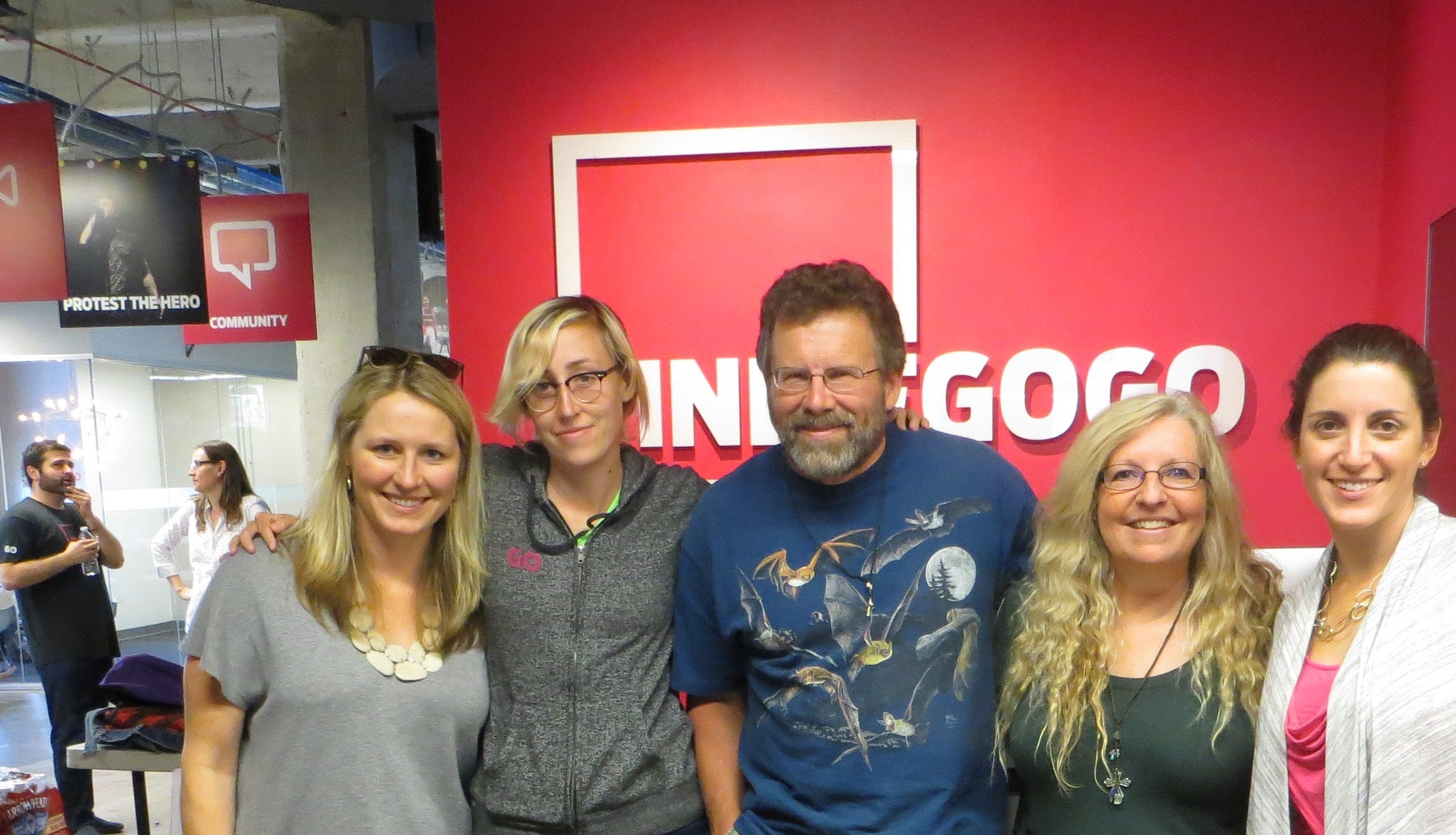 The year was capped off with the honor of being selected as one of the 100 Best Innovations of the Year by Popular Science.

In 2015, we were not able to accept any interviews. We “went dark” as we like to say, in order to give engineering 100% of our attention – such as creating our new SR3 panels based on the knowledge gained with the SR2s.

Still we were grateful for the press we received, most especially the mention on the White House website in President Obama’s State of the Union Address. There were articles in places such as: Infrastructure USA, CNN Money, and Tony Robbin’s blog. We received numerous requests to appear on television shows. We accepted only one: Innovation Nation, which aired on Valentine’s Day 2015.

The same month we accepted Indiegogo’s invitation to open a new InDemand crowdfunding campaign, designed for those who have already had a successful Indiegogo Campaign but have a need for ongoing funding to support their development. The InDemand campaign has ended, but additional donations are gratefully accepted here to help us purchase more needed equipment and hire more employees.

On Valentine’s Day of 2015, we were honored to be featured on Innovation Nation’s TV show. Their crew came to Sandpoint to film and it was so much fun.

We knew there would be some degree of energy loss for Solar Road Panels (which are laid flat for walking and driving) compared to rooftop solar panels (which are typically angled at the optimal way toward the sun. We were already collecting data between our own panel and an off the shelf rooftop panel we purchased at our home in Idaho. We decided to repeat the test at a couple of other latitudes. In May of 2015, we went to Tucson, Arizona and installed two set ups: One at the Biosphere2 and the other at a local hotel.

In July of 2015, we went to Moscow, ID to meet with the staff at the University of Idaho, who had expressed interest in a pilot project there. In the same month Scott and team member Justin accepted an invitation to display at the Detroit Maker’s Faire at the Henry Ford.

In August, we read an interview of Indiegogo Founder Slava Rubin who we had gotten to know through our Indiegogo Campaign in CNN Money.

He told an anecdote that amazed us:

“I was deep in the middle of the Amazon in Brazil last year, staying in a lodge that you could only get to by boat,” he said.

There he met an 11-year-old boy who told him about cool ways that people are harnessing energy, including Solar Roadways, which he’d read about on Indiegogo.

“He had no idea who I was,” said Rubin, adding that Solar Roadways had raised $2.25 million on Indiegogo from people in 150 countries. It’s one of the site’s most successful campaigns.

That month, we lost both Scott’s Dad and our treasured Advisory Board member, the famous Dr. Forrest Bird. Scott was honored to give a tribute talk about Dr. Bird at the Think Big Festival in Coeur d’Alene, Idaho in September.

Shortly after that we had a visitor from the UAE who flew to Idaho to talk to us about doing a pilot installation there.

In October, we talked about the UAE opportunity at a dinner party at Dr. Pamela Bird’s house. Pam was Forrest’s wife, also on our Advisory Board and had been our main mentor since the inception of Solar Roadways. She was the one we relied on when we came to a crossroad on our journey. She indicated that she would like to go with us on the proposed trip to the UAE and we were excited to hear it. Two days later, Pam was killed while flying her own plane ten minutes after taking off from her private Idaho airstrip. We were devastated and continue to miss her.