We have been blessed to have received so many wonderful awards, nominations and honors starting so early in our development.

Here are some of our favorites in reverse chronological order: 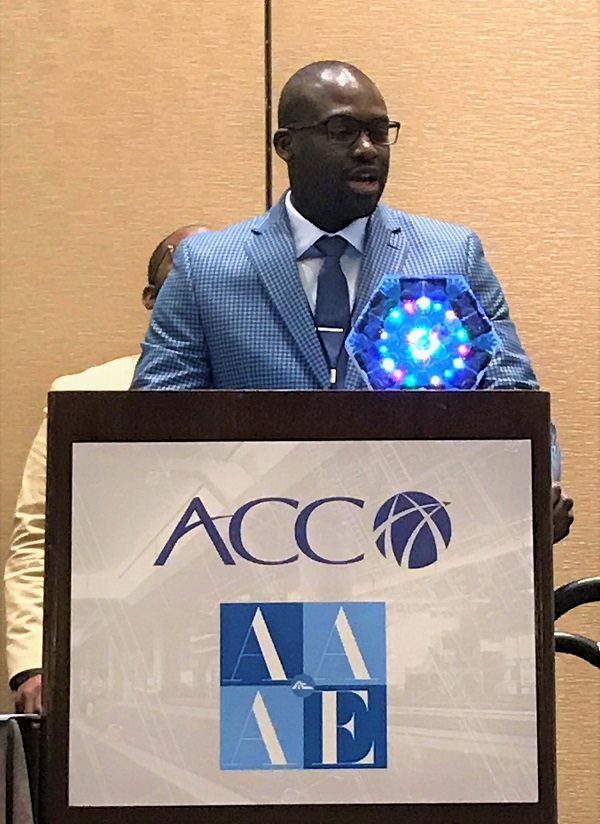 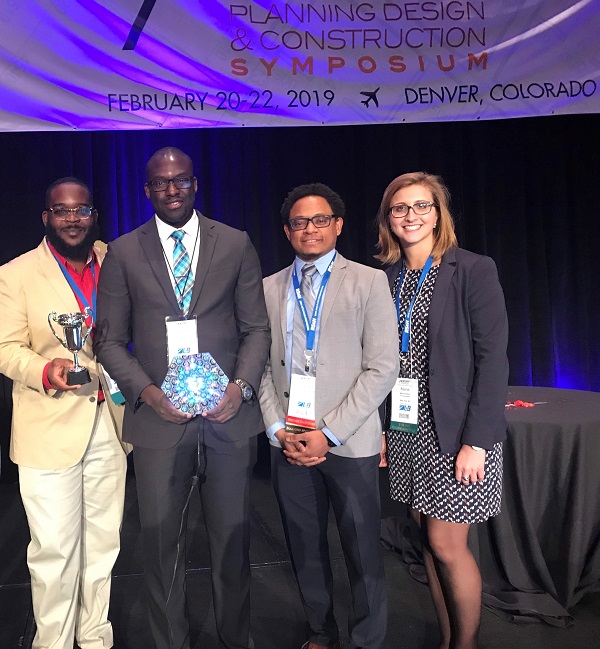 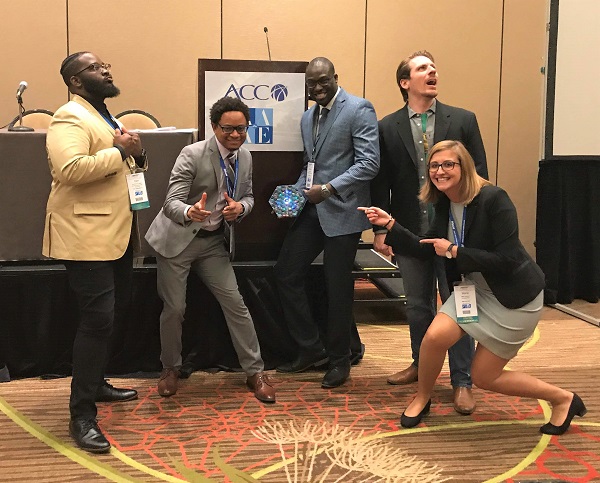 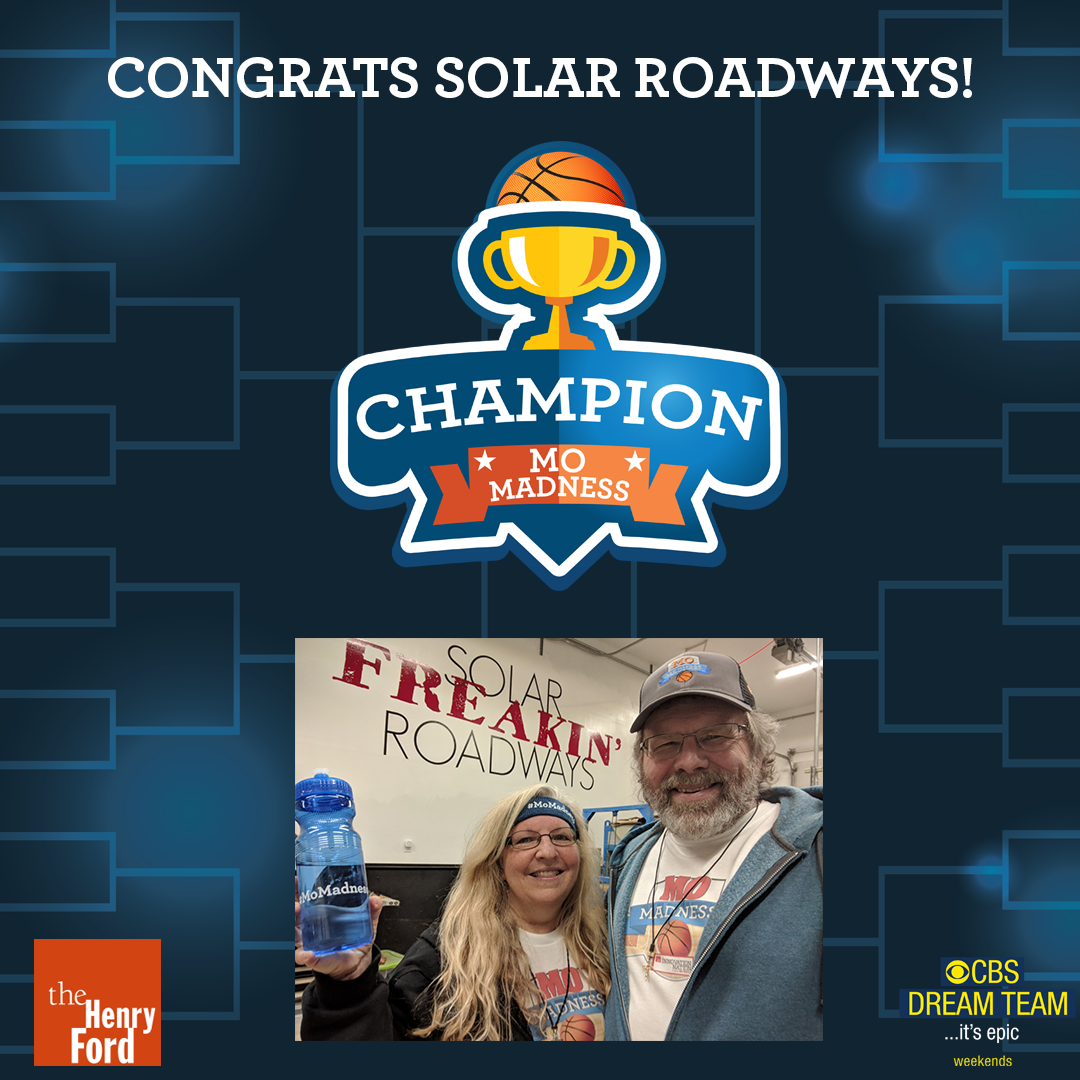 On our Video page, you can see the episode we filmed for Innovation Nation and a new video they just made for us for the competition (featured video at the top of the page): Solar Roadways Videos

2017 Solar Roadways was filmed for a French Documentary, not yet released. 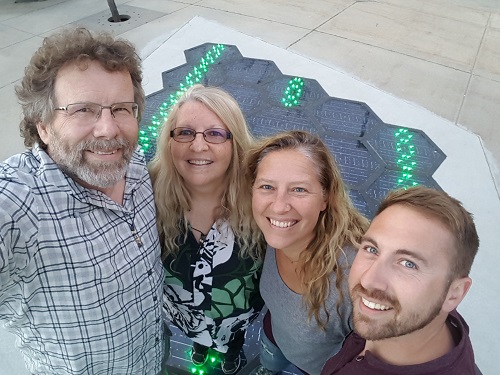 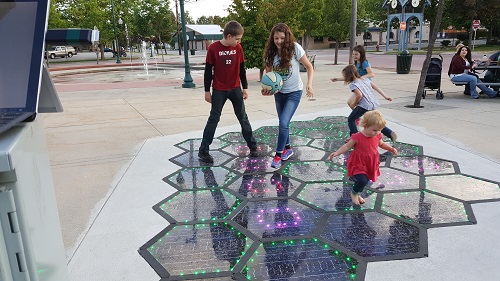 2017 Voted Most Innovative Local Manufacturer by our own Bonner County, Idaho community.
Best of Bonner County

2017 ColorRoadie: We are so excited to be named a winner in this competition by Colorado Department of Transportation – Road X Bicycle and Pedestrian Challenge:
Read RoadX Winners or
Watch video here 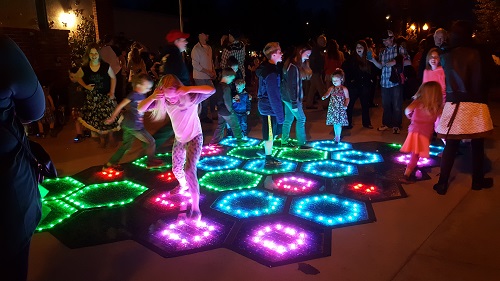 2017 Solar Roadways was pleased to be featured at ConExpo 2017 in Las Vegas. We were given a display in The Tech Experience: Infrastructure exhibit and Scott was interviewed by iHeartRADIO. Scott was also honored to speak in the Tech Experience series along with others such as Mike Rowe and astronaut brothers Mark and Scott Kelly. All week, we enjoyed meeting visitors to our display from all over the world.
Read the Boss Magazine article or
Listen to the radio interview 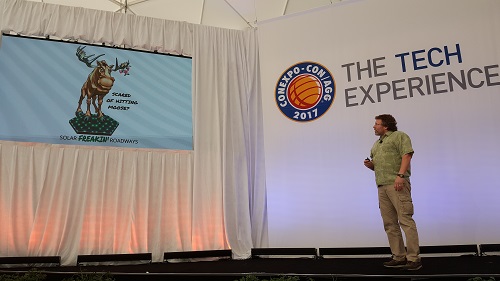 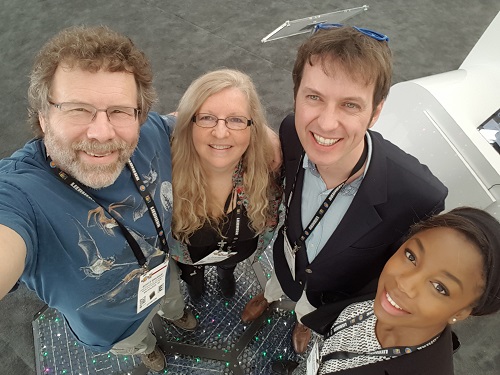 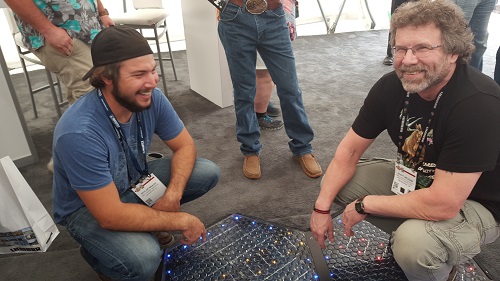 2016 Indiegogo filmed Scott and Julie talking to the Indiegogo team in San Francisco.

2015 Scott & Justin attended Maker’s Faire Detroit at the invitation of Innovation Nation and had a display in their booth at the Henry Ford Museum of American Innovation.
Read the Curbed article 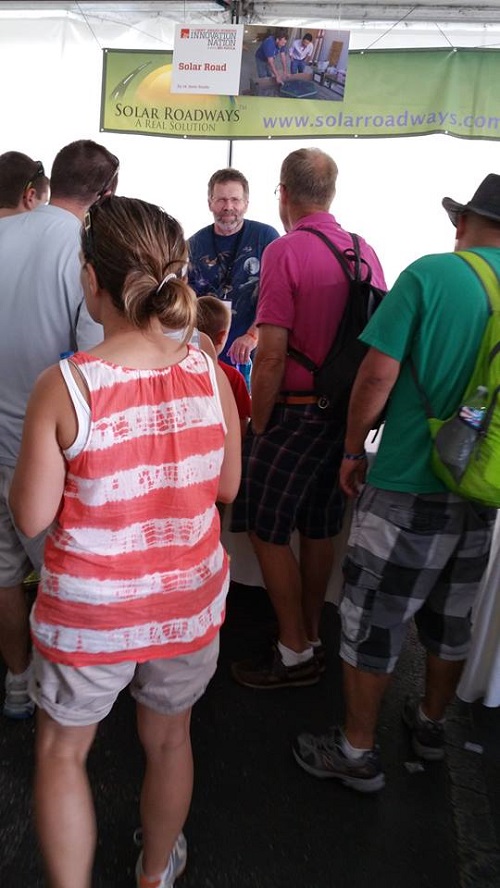 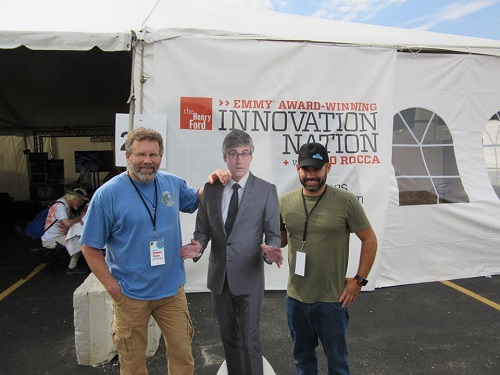 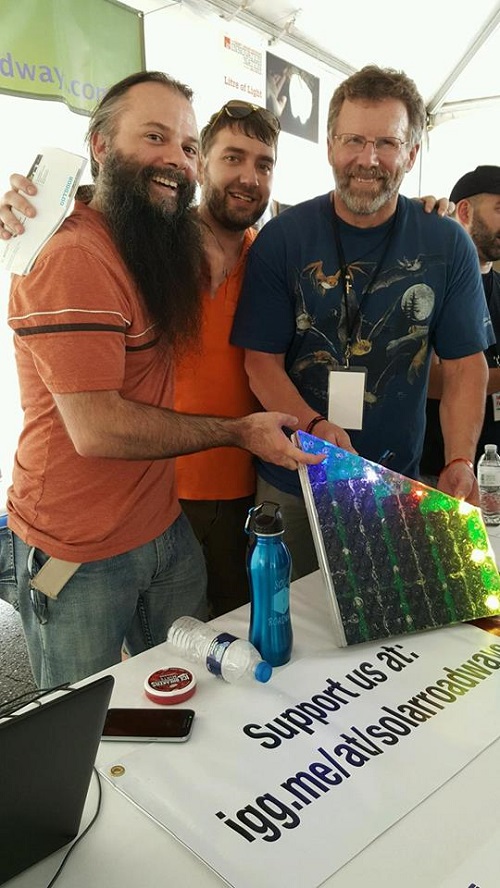 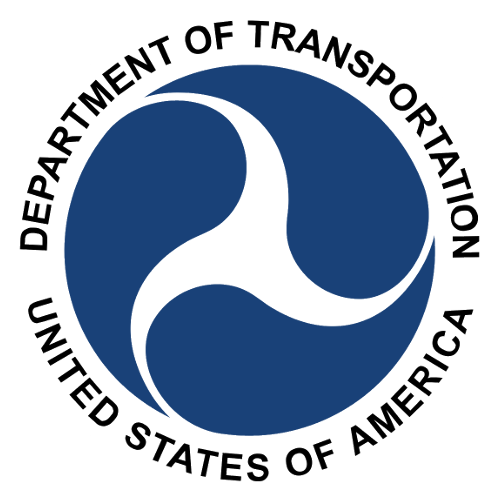 2015 Solar Roadways featured in a short doc produced by Indiegogo, called Solar Roadways InDemand, which was filmed partially in the Buena Park, California neighborhood where Scott and Julie grew up together.

2015 Solar Roadways were mentioned in the online version of President Obama’s State of the Union Address:
Read the CrowdFund Insider article 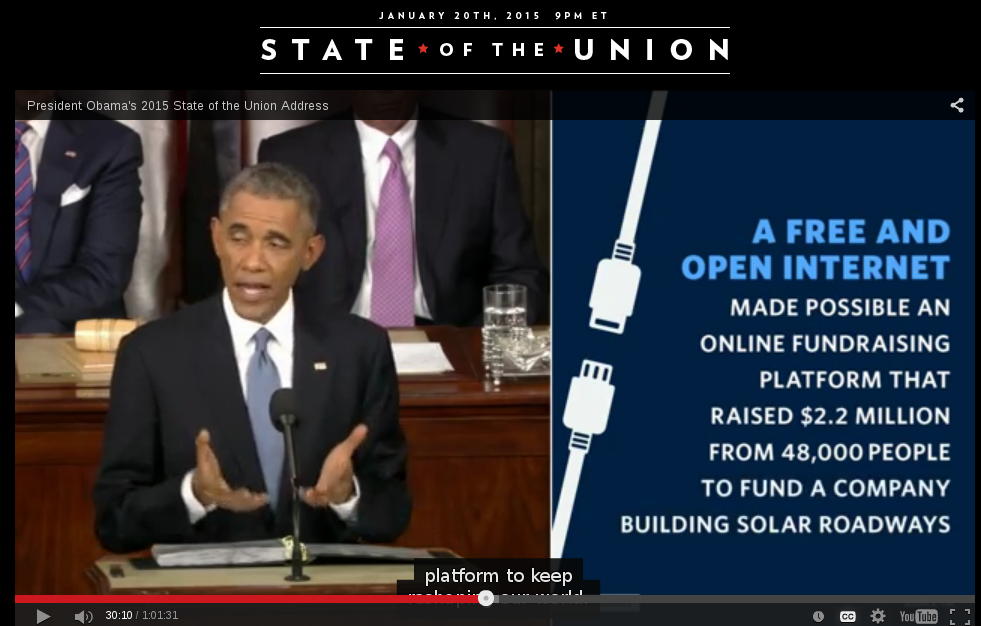 2014 Scott and Julie were honored to be invited to attend the First White House Maker’s Faire.
Read the Indiegogo blog 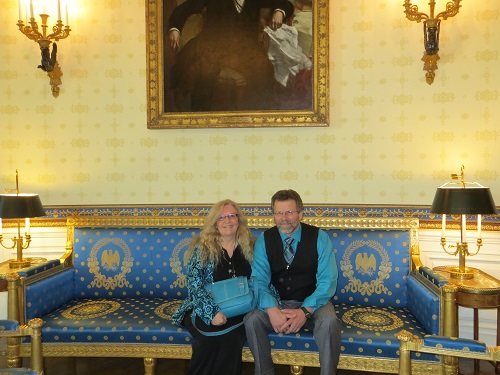 2014 Indiegogo chose Solar Roadways to be the featured speaker at their All Hands annual meeting in San Francisco. 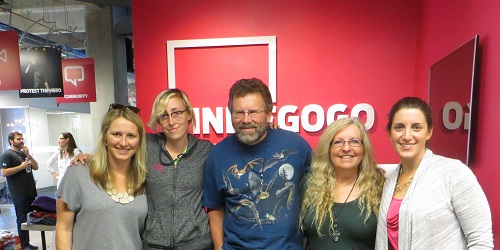 2014 During our Indiegogo Campaign we were honored to be supported by so many celebrities. Julian Lennon was the first to offer support and it went from there. So grateful!
You can see them here:
Celebrity support!

2014 Solar Freakin’ Roadways, a video created for us by volunteer genius Michael Naphan went viral. As of this writing, it has had over 22 million views. It’s become so famous that people now write to us asking for a Solar Freakin’ Driveway!

2014 Solar Roadways raised over $2.2 million on crowdfunding platform Indiegogo. Solar Roadways broke the records for having the most donors, over 48,000 from 165 different countries. We were invited to continue on Indiegogo with an InDemand campaign, and perks are still available there. We have now raised over $2,282,000 from well over 50,000 donors. Those donations help keep us moving forward and we are so grateful.
Solar Roadways on Indiegogo
Yahoo! News 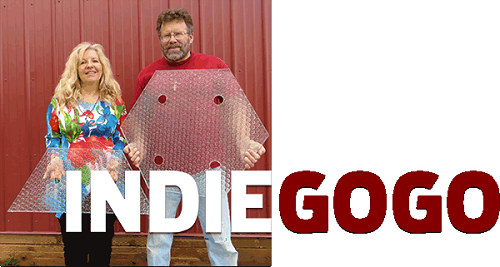 2014 Popular Science: One of 7 “Best of What’s New” Engineering category in the “100 Greatest Innovations of the Year-2014”.
Popular Science 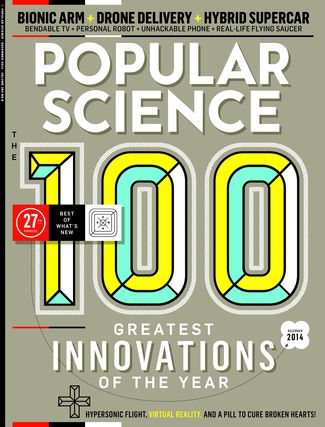 2013 We were honored to have U.S. Senator Mike Crapo (R-Idaho) film this endorsement video for us:

2013 Solar Roadways was featured in a GE Focus Forward short documentary directed by Michèle Ohayon. Cinematography by Theo van de Sande. This film is often shown before major movies in theaters across the nation. 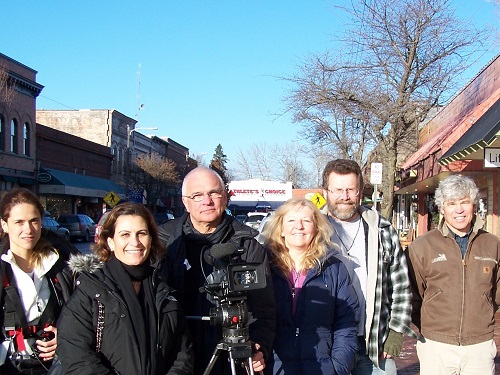 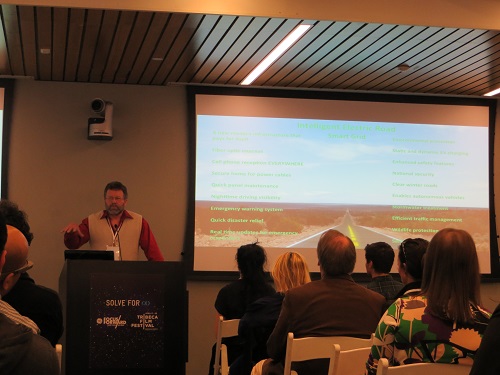 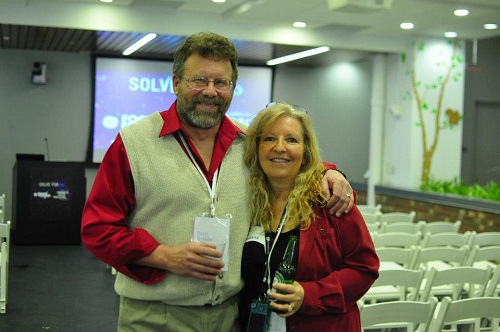 2013 Chosen as one of Google’s Moonshots.
Read the Business Insider article 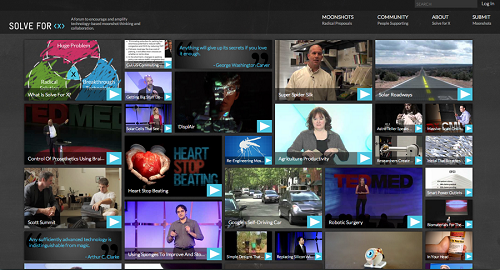 2012 We traveled to Kentucky, where Scott was happy to speak twice at the Festival of Faiths and also at the Rotary Club.
Read the Center for Interfaith Relations article 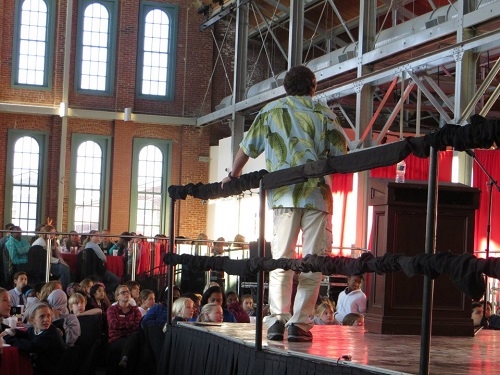 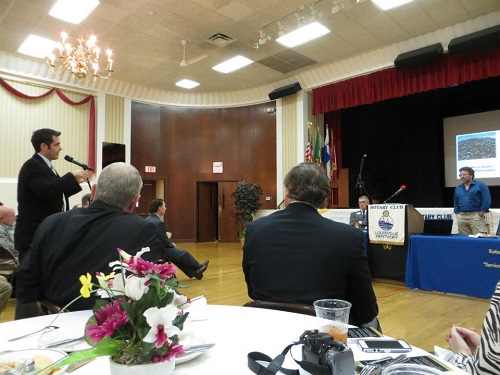 2011 General Electric Ecomagination Powering the Home Challenge Winner- Solar Roadways won the Community Award for the second time. This time there was no financial award attached with the win.
Read the Fast Company article

2011 Solar Roadways appears in the full-length documentary YERT about a 3-person team who traveled to all 50 states in search of solutions to Global Warming. Our section was filmed in 2007, when SR was still in concept phase. This film has won multiple awards.
YERT on Amazon 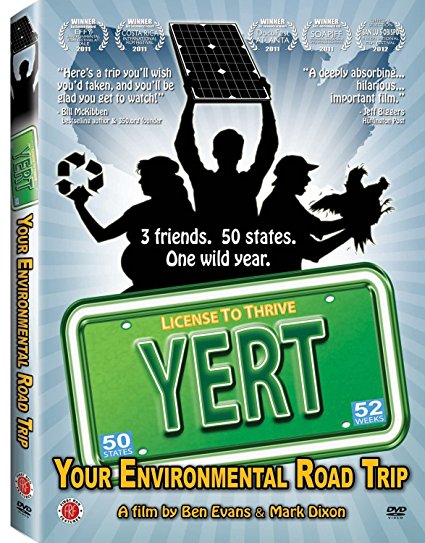 2010 General Electric Ecomagination Powering the Grid Challenge Winner- Community Award (most popular votes out of over 3800 challenge entries). We were flown to New York along with other winners to attend the award ceremony and were awarded $50,000.
Read AutoBlog
Read Wired
Read GreenBiz
Read TechCrunch

2010 TEDX Talk Sacramento, California. Scott was honored to accept an invitation to deliver his TED talk. He received a standing ovation and we enjoyed talking to audience members afterward. 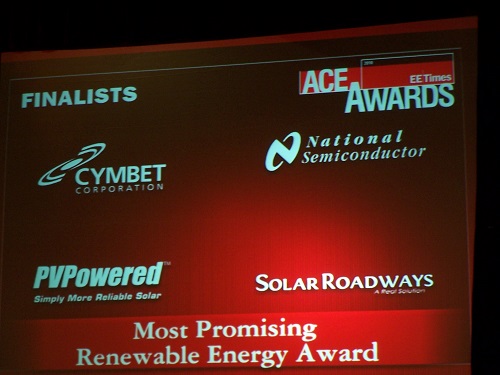 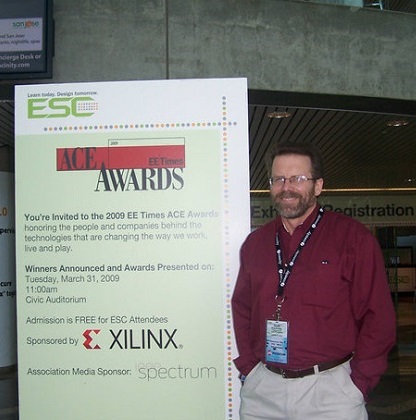 To see more of our Press Coverage:
Click here